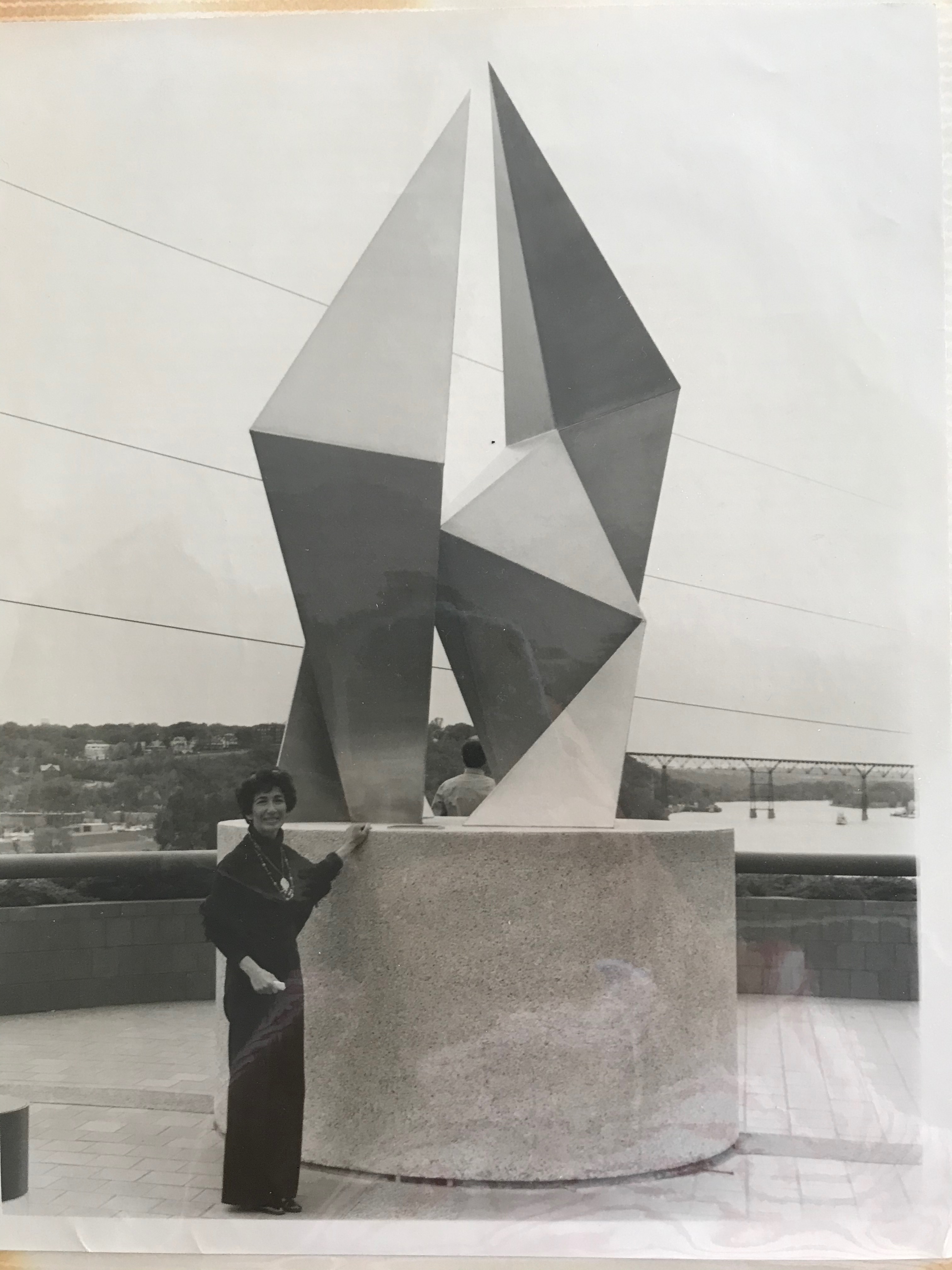 You may have noticed there is a new sculpture on campus, in front of the library. It was installed in November of 2020 after a lengthy and meticulous process of conservation. The sculpture is named Sky, by the artist Georgette Sosin and it is forty years old. Its previous home was in downtown Saint Paul, and its presence at UMD was made possible with funding support from the Tweed Museum of Art’s Gilmore Fund and the family of the artist.

To understand this work of public art, it helps to remember the cultural context in which it was made. Claus Oldenberg unveiled his 45 foot high Clothespin sculpture in Philadelphia in 1976, the same year that America celebrated its bicentennial. Ronald Reagan was elected president in 1980. Georgette Sosin completed her Sky sculpture in 1981, the same year that Richard Serra installed his 120 foot long Tilted Arc in New York City. Maya Lin finished the almost 250 foot long Viet Nam Memorial in Washington, D.C. in 1982.  The public art movement was just beginning to thrive, having been initiated in 1969 with Alexander Caulder’s 43 foot tall La Grande Vitesse in Grand Rapids, Michigan. American public art was tending to be monumental in scale.

Going against that trend, Sosin’s Sky sculpture is human scale. Her sculpture is a mere twelve feet tall mounted on a five-foot high base to draw the observer’s attention to the sky above.  It was originally made to sit on the river bluff overlooking the Mississippi River in downtown Saint Paul, Minnesota. For thirty-five years it occupied the south end of Kellogg Plaza, a place that affords a view of the river valley and the downtown skyline at the same time. It was an impressive site.  Her art was in a very public place where it was seen every day. Instead of attracting attention to its size her sculpture points to the endless sky.

Sky was of its time. It was produced at the intersection between modernism and post-modernism. It is a shining example of modern abstract art; it also invites observers to be more aware of their surroundings. Sosin recognized that her art would impact those who encounter it on a daily basis and that it may alter the observer’s perception of the sky and perhaps of themselves. This makes it both public art and post-modern. Sosin wanted her artwork to be about the observer’s experience.  She was also ahead of her time in re-visiting modernism’s ideas of form and context. She was working with a subject larger than life. She was doing something meaningful.

Today Sky is located on the UMD campus, high on a hill above Lake Superior.  What a life this sculpture has had. The Mississippi River and now Lake Superior as its foil to the sky above. Visit the sculpture when you can. Walk around it and imagine the artists’ intentions. See how she gave the aluminum used to sculpt her artwork such energy, through form and surface, with a presence much larger than its physical scale. Your perception of the sky may be changed.